Tour of All Saints' Church

All Saints’ stands on the site of a much earlier Roman settlement.

Roman mosaics were often found by grave diggers in centuries past and came to be known by locals as the “Saints’ Pavement”. Fragments of the decorated floor found during the building of the Victorian extension of the Church in 1860 are now preserved in the west corner of the south aisle.

We don’t know what the building looked like but what stood here during Roman times was a substantial structure. It’s thought that it was either a villa or, more probably, a mansio [a military or naval dwelling].

It may well be that the first Christians to worship on this site did so before the end of the Roman occupation of Britain in the 4th Century.

The eight hundred year old Norman tower is thought to have originally doubled as a place of defence, for the Church predates Oystermouth Castle. Originally the wooden doors at the back of the tower were the main entrance to the church. You may reach the belfry and clock chamber using the staircase – interestingly the stairs ascend in an anticlockwise direction designed to ensure that sword arms remained free. The first room that you reach allows access to the clock and onward to where the bells were kept. There is access to the roof which was a great vantage point from which to deter attackers. This military-style tower with its massive walls is similar to other towers in Gower and was originally designed to give protection to the Anglo-Normans from any sudden attacks by the Welsh!

In 2016 the old Victorian porch was demolished and rebuilt in a modern design by the Church Architect, Dewi Evans. It includes clerestory windows and retains some medieval features - such as the stone heads and holy water stoop.

The Lady Chapel was the original chancel and sanctuary of the ancient church. It is a place set aside for private prayer and where the weekday Holy Eucharist is celebrated.

It is the oldest part of the Church and is thought to date from the early 12th century.

The altar front was carved by Rev'd John Davies, a former Rector of Llanmadoc and Gower historian. It was presented to All Saints by Elaine, youngest daughter of Dame Catherine [Kate] Prudence Jenkins, in memory of her aunt Margaret Dinah Thomas. The windows behind the altar date from 1972 and are in memory of Archibald Johnson and his son Campbell Stanley. Made by Celtic Studios of Swansea.

The ancient 'Pillar Piscina' to the right of the altar is a stone basin with a drain and was discovered some time before 1849. It was used to wash the communion vessels after the celebration of the Mass. It is one of the oldest objects in the Church and was probably buried by parishioners to save it during the turbulent times of the Reformation or the 'Commonwealth'. 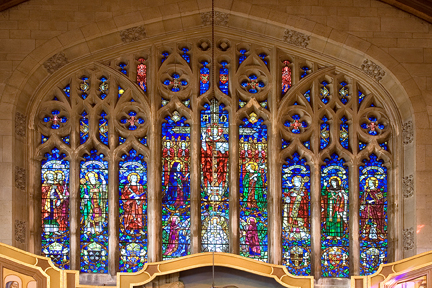 Directly above the high altar is a large, imposing and colourful window in memory of Col. David Lewis, sometime Churchwarden. It depicts Christ in Majesty, the 'True Vine', whose branches are intertwinned with the patron saints of the six Welsh Cathedrals; Sts Peter and Paul [Llandaff], St Asaph, St John the Evangelist [Brecon], St David, St Woolos [Newport] and St Deiniol [Bangor]. The fine work of art celebrated the establishment of the Church in Wales as an autonomous province within the Anglican Communion. The tracery of the window was designed by Leonard William Barnard [1870-1951] the architect of the Church.

Victorian in origin, this ornate and elaborately carved altar with gilded leaves, has three painted panels. The central panel depicts the Three Wise Men visiting the infant Jesus; on the left the annunciation of the Angel Gabriel to the Blessed Virgin Mary; to the right the Parable of the Lost Sheep withh the Cross of Calvery in the distance. For most weeks of the year the altar is usually covered by frontals.

The impressive Reredos,  immediately behind the High Altar, depicts the Epiphany of Our Lord and on the words of Jesus, 'and I, if I be lifted up from the earth, will draw all people unto me.' The Three Wise Men bearing their gifts are the first in a procession which shows men, women  and children of all ages and nations coming to pay homage to the Christ Child. The concept of time and distance is beautifully displayed and conveyed. The Reredos was designed by G B Beadle of Faith Craft Works, London.  It was dedicated on All Saints Day 1951 and a major feature is the raised, carved images of the Wise Men and the Holy Family. The reredos was originally designed to be closed during Advent and Lent. The left door shows paintings of the Presentation of Christ at the Temple and the Baptism of Jesus while the right shows Pilate washing his hands and Jesus appearing to Mary Magdalene on Easter morning.

The Lifeboat Window is perhaps the most famous of the windows. It is in memory of the eight lifeboat crew who drowned attempting to rescue the stricken ship “Samtampa” stranded on the rocks off Sker Point, Porthcawl in 1947 during a hurricane-force gale.  Read more about this tragic event. 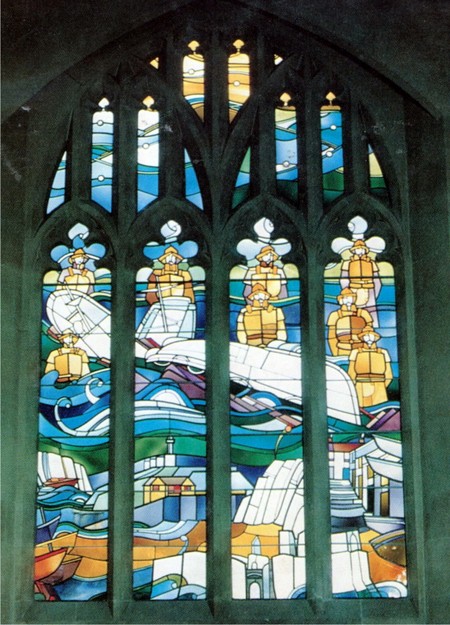 The window was installed in 1977 and tells the story of a major lifeboat tragedy with the wreckage of the “Samtampa” and the upturned lifeboat in the centre. In the top of the window, the eight lifeboat men are standing over the roaring sea. Their souls are represented by small white circular stars in the sky ascending to heaven. In the bottom of the window are rocks, the lifeboat house and a village street with cottages. The window was designed by Tim Lewis of Swansea, with Glantawe Studios, Morriston, Swansea. 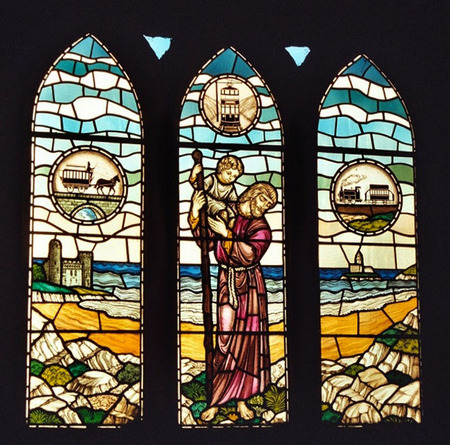 St. Christopher's Window, on the west wall, commemorates the world famous Mumbles Railway. St. Christopher is in the middle and three different Mumbles trains are depicted - horse-power, steam-driven and finally electric, as well as Swansea Castle, to the east, and the Mumbles Lighthouse, to the west. The window was dedicated in 1982. The design was by Marjorie Walters to mark the 175th anniversary of the Mumbles train.

Other windows are described in the gallery.