The Demise of the Back Street Shop

In a fit of pique, Napoleon Bonaparte, once contemptuously dismissed the British as being,- “a Nation of Shopkeepers”. I did not actually hear him say this but the report does come from a reliable source. In any case, how right he was! Certainly, when I was a boy there seemed to be shops everywhere in Mumbles and to this day, a fine and healthy shopping centre, buzzing with vitality, still flourishes in our midst.

Of course, there have been changes, there’s always change. In the early part of the 20th century, this change progressed at a barely perceptible rate but, during World War 2, started to accelerate, followed by the dramatic results of the 80’s and 90’s. One does not have to look far to see the reasons.

Until the post war years, almost all the local retail business was confined to supplying the Mumbles shopper with the necessities of life, viz, food, clothing, hardware and the like. The public was well served, to the extent that few of these essential needs were unobtainable in the village and could be bought from multiple sources, thus affording a richness of choice and a personal service second to none, all available on one’s very own doorstep. 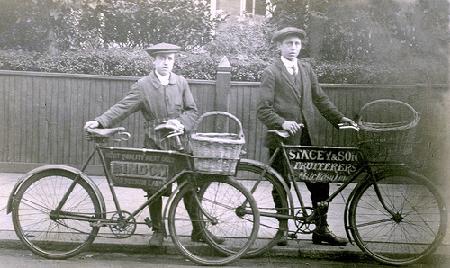 An added bonus was delivery, if required, by one of the fleet of errand boys that operated in the village (average pay 5 shillings per week - today this equals 25p). In other words, as far as the shopper was concerned, Mumbles was self sufficient.

Few cars, no fridges, no freezers and slender pay packets were the factors that influenced the pattern of shopping, as it was. Frequent daily shopping meant small loads and fresh food.

In the last decades of the 20th century, the supermarkets set about their campaign of destruction on the small tradesman and were aided by the fact that, now, most families had a car, a fridge, a freezer and a stout wallet. High Street parking was now becoming a thing of the past and perhaps one of the most powerful inducements employed by the supermarket was the convenience of the free parking facility in the immediate vicinity. All this plus the bulk food buying at discount prices, coupled with deceptive offers (“buy one get one free”) stretched the loyalty of the shopper to breaking point. The superior quality and the personal service, of the old way, was sacrificed for the sake of the family purse and convenience.

One by one, the old butchers’ shops disappeared from Newton Road, as did the family bakers, grocers, outfitters, and the like. A few stalwarts remain to fight a noble rearguard action, still offering the noble principles of old, viz personal service and quality. They deserve all the support that they can get.

Mumbles has been fortunate. Instead of Newton Road having empty boarded up shops (all too familiar elsewhere), a new entrepreneurial set appeared. Taking advantage of the improved economics of the time and, of the more sophisticated society, they catered for this new market. So, these former tradesmen’s shops became occupied by purveyors of luxury goods, viz. costume jewellery, expensive eateries, ladies hairdressers and beauty salons, art shops and galleries, top class ladies clothes and the like. As a result, Newton Road still buzzes thanks to the courage of this new breed of shopkeeper. A dramatic change, indeed.

Simultaneously, there was an even more devastating revolution taking place in the backstreets of Mumbles. Mumbles, like every other community in Britain, had a surprisingly large number of small back street outlets. In total, they far exceeded the number of shops in the main shopping centre of the Dunns and Newton Road. They abounded! They were everywhere! Every part of Mumbles had its own little crop of shops, from Southend to West Cross. Most of these shops appeared in the early part of the century as a result of the poverty that was rife at this time and was indicative of surprising initiative. A needy widow, or cash strapped family, would convert the front room of an ordinary little cottage into a shop, to sell anything they could lay their hands on. Home made laverbread, cockles, fish, lobsters and crabs, cakes etc.

Some sold sweets. Some basic foodstuffs, cigarettes and papers and the like. Anything. There were so many of them that one wonders how they survived, but those were the days that an extra few shillings a week was all that was expected and was enough to make life a little more tolerable. Some were seven day wonders and folded up. Others enjoyed a degree of success to the extent, that they not only survived but developed into respectable and substantial little businesses . The situation in Gloucester Place was typical of the village and was virtually duplicated at road intersections all over Mumbles.

The Victoria Inn stood (and still does) on the corner of Gloucester Place and Westbourne Place. Opposite was Mr. Morris the butcher. Further up, on the corner of John Street and Gloucester Place, was T. and G. Davies’ Bread Shop selling bread baked in the family bakery, a few yards up the road. On the opposite corner was the legendary sweet shop of Mary Taylor. Twenty yards up John Street was Sam Davies’ sweet and general grocery shop. All this within a circumference of twenty five yards!

Mary Taylor’s shop epitomised the back street shop. How long it had been there I do not know. Mary Taylor lived alone, her history unknown to me. She appeared ageless with her grey hair tucked back into a fine net. Her tall angular body was enveloped in a colourless dress over which she wore a floral pinnie. I never saw her feet.

I suspect that there were scores of “Mary Taylors” throughout the land, each one harbouring a secret, little untold drama.

Her shop was open from 8.00 am until 9.00pm every day, except the Sabbath, Mary was a good Christadelphian. Access was gained by ascending a few steps from Gloucester Place, through her front door into the passage and turning left, to open a half door into the shop which occupied that space, formerly her parlour.

Opening the half door activated a bell on a spring, which, in turn, activated Miss Taylor who would then make her entry from the right, coming into the shop from that mysterious, aspidistra-laced, hinterland of her private gas-lit domain. The shop floor area measured approximately 8 feet square. On the left was the window space, opening on to Gloucester Place and, facing the customer, with an extension to the right. was an L-shaped counter. The walls behind these counters were loaded with goods, from floor to ceiling. 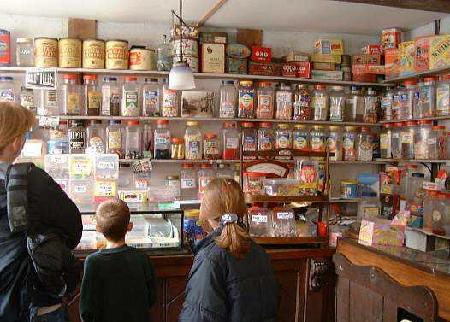 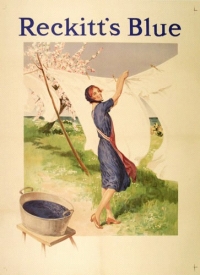 An ornate glass cabinet stood at the end of the counter, its glass doors were elaborately etched with the name “Fry’s Chocolate”. This housed tablets of scrubbing soap, scouring pads, brushes and Reckitt’s Blue. Presumably, the Fry’s Chocolate was stored in a wash bucket.

But the main attraction was in the front window.

That window was packed with trays of sweets over which hung one of Mary’s flypapers adorned with the corpses (or near-corpses) of flies and wasps in various stages of decomposition. Elsewhere amongst the sweets were other corpses who had either fallen off the flypaper, or who had come to pay their last respects to relatives on the flypaper and had died at the wake, held in one of the trays of sweets.

Sweets were bought for one halfpenny an ounce, weighed on her little scales and tipped into a tiny screwed up bag. I remember that Cadbury’s Milk chocolate retailed at the rate of 1d per ounce and was usually sold in 2oz bars for 2d. A Mars bar was 2d.

Mary always greeted her younger customers in the same way,

She would turn her back and always say the same thing (that is to her younger customers),

Mary had the sack of potatoes on her counter and, as required, would thrust her hands into the earthy mass and pull out the potatoes on to her larger scale. Many’s the time I have slipped across the road for potatoes and after being supplied, asked Mary for some sweets. With the potato dirt still on her hands she would grab a handful of sticky sweets from the window. If I was lucky, not only would I have gritty sweets but also the odd dead fly. She never charged for these extras.

That old saying, “You’ll eat a peck of dirt before you die!” certainly applied to the back street youth in Mumbles. But, it had its benefits! This intake coupled with the exposure of the populace to the sewage rich waters of Swansea Bay (where in the Summer, every village lad swam several times a day, or went through the motions), gave a naturally acquired resistance to a wide range of diseases (to those who lived).    As a result, Mumbles lads who served overseas really did not need any inoculations they had already had all these diseases.

Like all shops in those days, Mary Taylor’s had a smell of its own. It was a dry, dusty sort of smell with undertones from all those open-trayed sweets, the Mumbles potatoes, the boiled bacon from the back, the rich chocolate from the “Five Boys” bars and 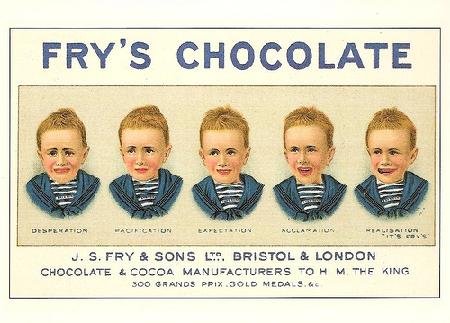 goodness knows what else. It added up to a pleasant, familiar and comforting aroma that added to the feeling of warmth and security that we enjoyed as children.

How convenient these little shops were! Mrs. Hullin could slip up for some sugar wearing her slippers and Mary Glover would pop into Davies’ for a loaf, with her hair in curlers.  Little boys and girls would be despatched carrying a coin in a screwed up note which had a small shopping list on it, with safety. The hours they were open meant that a last minute need could still be satisfied at a moment’s notice.

Alas, they virtually all succumbed to the pressures of the time and closed their doors, with a finality. The little front room shops were dismantled, reverted to their original form and became the parlour again.

No longer, on winter evenings, does the light spill out on to the pavements in front of the little shop windows. These were little havens in the darkened streets and attracted groups of children, having a last play before bedtime.

Like all communities, Mumbles lost something of great warmth and character, which will never return.